Skip to content
Dinah is one of my favourite authors, she not only has the beautiful ability to paint pictures in my mind, she also conjures taste, evokes smells, and I feel, I really feel the emotions of her characters.  Historical (tick), relationship (tick), family drama (tick), provocative, rich, expressive, captivating, exotic, vibrant (tick, tick, tick). Her books have been in the Sunday Times top ten, and two have been Richard and Judy book club picks.
Liz – Who was your favourite character from a book when you were a child and what was it about them that you loved?
Dinah – I loved Jo from Little Women because she was such a strong and driven character. I was fascinated by her longing and determination to be a published writer and my heart broke when her sister burnt her manuscript. She might have forgiven her sister, (horrid, horrid girl, whose name escapes me!) but I didn’t.
Liz – Have you always written? What made you decide to try your hand at writing a book and how long was it before you were published?
Dinah – My first novel took about a year to write and remains unpublished – always will do so. Writing it was a fantastic learning experience, but I’d never want to see it in print. Everything I learnt as I wrote that first book influenced me as I took on the challenge of writing The Separation, which was bought by Viking at Penguin in 2012, and published in 2014. Years before I began to write novels I tried my hand at a children’s book and, throughout my life, I have scribbled my thoughts as a way of coping with life. It never occurred to me to write a novel until I had time on my hands and worries that I could do nothing about. I had no idea if it was something I could do or not. Luckily it turned out well. Writing fiction began as a means of escape but now my only regret is that I left it so late.
Liz – Do you read non-fiction, if so, is it for pleasure, for research, or a little of both?
Dinah – It’s mainly research, although I recently read a wonderful memoir written by a woman with early onset dementia. Both my parents had age related dementia and I so wish I’d been able to read this book while they were still alive. So worth a read and a huge bestseller it’s called Somebody I used to know by Wendy Mitchell. Everyone should read it.
Liz –  I find myself transported to the world you write about, particularly when it comes to the senses, do you write from memory, imagination, or when you are there?
Dinah – It’s a combination of all those things plus anything that might have inspired me during the research period. Sometimes a detailed memoir helps to create the feel of country in my mind, sometimes a film, sometimes dry old anecdotes that I’ve found hidden away in an obscure corner of the internet or in a dusty old book. All of it helps but nothing beats going to the country to pick up atmosphere and sensory detail, although when I’m there I often need to search to find the vestiges of the past that I’m really after.
Liz – What has been the nicest surprise you’ve had since you started writing?
Dinah – I have been lucky that there have been so many. Firstly, The Tea Planter’s Wife being chosen as a Richard&Judy book club pick was just out of this world thrilling. And then when it went on to become a Sunday Times Number one and staying in the top ten for months… Wow! It was totally unexpected and so amazing I really had to pinch myself daily. Since then I’ve had two more top tens and a second Richard&Judy pick this year with The Sapphire Widow. All of this has truly surprised and delighted me, along with how lovely the people I work with at Penguin are, plus the fantastic readers, authors, and bloggers I’ve met along the way. It’s all been a wonderful surprise.
Liz – What is your favourite research trip memory?
Dinah – Leaving Tea Trails. We had been staying in a fabulous colonial bungalow beside a huge lake in the hilly tea country of Sri Lanka, where I set Tea Planter. We had to depart for our journey home with our luggage piled high in one canoe, and us squeezed rather nervously into another, because the road had been completely washed away by the monsoon. I had visions of the cases landing in the water or, if not that, one of us – but, despite being a bit wet, we reached the other side without mishap.
Liz – Can you tell us anything about your next book?
Dinah – I am loving writing this one. It’s about a crime that happened in the past in Burma but that must be solved in the present. It revolves around the tricky relationship between a mother and her daughter and, as a dual narrative novel, it’s set in Gloucestershire as well as Burma. Publication is scheduled for July 2019 although that may change. For example, this year The Sapphire Widow had been scheduled for late July but because of the Richard& Judy window it had to be brought forward to early April in a mad but very exciting rush. They didn’t even have time to make the book proofs and everyone had to be sent finished copies instead.
Thank you so much Dinah, I can’t wait to get my hands on your new book!
Dinah’s latest novel The Sapphire Widow is available now in Paperback, Kindle and Audio Book.
You can follow Dinah on Twitter: @DinahJefferies
Or visit her website: http://www.dinahjefferies.com 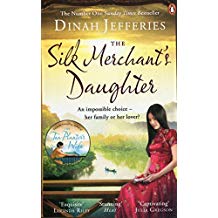