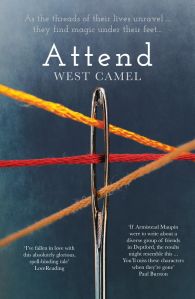 Every now and then a novel comes along that is something particularly extraordinary and unusual.  Attend is one such novel.  A tapestry in novel form, West has built a story that brings together the threads of three very different lives.  Characters who have suffered, are suffering, who feel broken and cut off. Failures, unable to fit in and yet when it comes down to it, as we weave our way through the story we can see that those around them are just the same, if not worse.  Perhaps these broken souls can actually save themselves and those around them after all.

Deborah is this strange, almost ghost like figure.  She is old, very old.  A lonely, invisible soul who believes she can never die.  She also believes that people can’t see her yet Sam and Anne both stumble across her at a time when each are consumed with a sense of despair and sadness.  Sam has moved to Deptford in the hope to finding his way and to escape the cycle of self hate and one night stands with strange men.  Anne is a recovering addict, ostracised from her family, daughter and grandson.  She’s now clean but those closest to her are set in their belief that she’ll never change, that she’ll always be a disappointment.

For both Sam and Anne, their encounters with Deborah are confusing and almost unbelievable and yet somehow she begins to make them see things a little more clearly with her strange stories and adventures. She seems to lurk in the background and yet is a central character leading the story; the thread that brings them together if you like.

This is a brilliantly written and impressive debut from West.  Words at times can be crass and harsh, making me wince and at other times beautiful and lyrical, perfectly capturing all at once the heartbreak and the brutality, as well as the beauty and wonder of the lives we are visiting.  There is a magical mystery that is held beneath the streets of Deptford, in tunnels where secrets lie still within the dank darkness. Yet these secrets begin to surface as dangerous events threaten those dear to both Sam and Anne. Action must be taken and so both face their own demons head on for the sake of those they love.

This is a tale that shows us the impact our actions can have… they seep out into the world, affecting people and events far more than we realise. No matter how small we feel our lives are, they matter.  Even for Deborah, who felt invisible and forgotten for so long.

Thank you so much to Anne Cater for inviting me to be a part of this blog tour and to Orenda Books for a copy of the eBook.  Attend is a wonderful, rich atmospheric novel and I thoroughly recommend it.

‘A highly anticipated debut, blending the magical realism of Angela Carter and the gritty authenticity of Eastenders’

When Sam falls in love with Deptford thug Derek, and Anne’s best friend Kathleen takes her own life, they discover they are linked not just by a world of drugs and revenge; they also share the friendship of the uncanny and enigmatic Deborah. Seamstress, sailor, story-teller and self-proclaimed centenarian immortal, Deborah slowly reveals to Anne
and Sam her improbable, fantastical life, a history of hidden Deptford and ultimately the solution to their crises. With echoes of Armistead Maupin, Attend is a beautifully written, darkly funny, mesmerisingly emotive and deliciously told debut novel, rich in finely wrought characters and set against the unmistakable backdrop of Deptford and South London.

Born and bred in south London – and not the Somerset village with which he shares a name – West Camel worked as an editor in higher education and business before turning his attention to the arts and publishing. He has worked as a book and arts journalist, and was editor at Dalkey Archive Press, where he edited the Best European Fiction 2015 anthology, before moving to new press Orenda Books just after its launch. He currently combines his work as editor at Orenda Books with writing and editing a wide range of material for various arts organisations, including ghost- writing a New-Adult novel and editing The Riveter magazine for the European Literature Network. He has also written several short
scripts, which have been produced in London’s fringe theatres, and was longlisted for the Old Vic’s 12 playwrights project. Attend is his first novel. 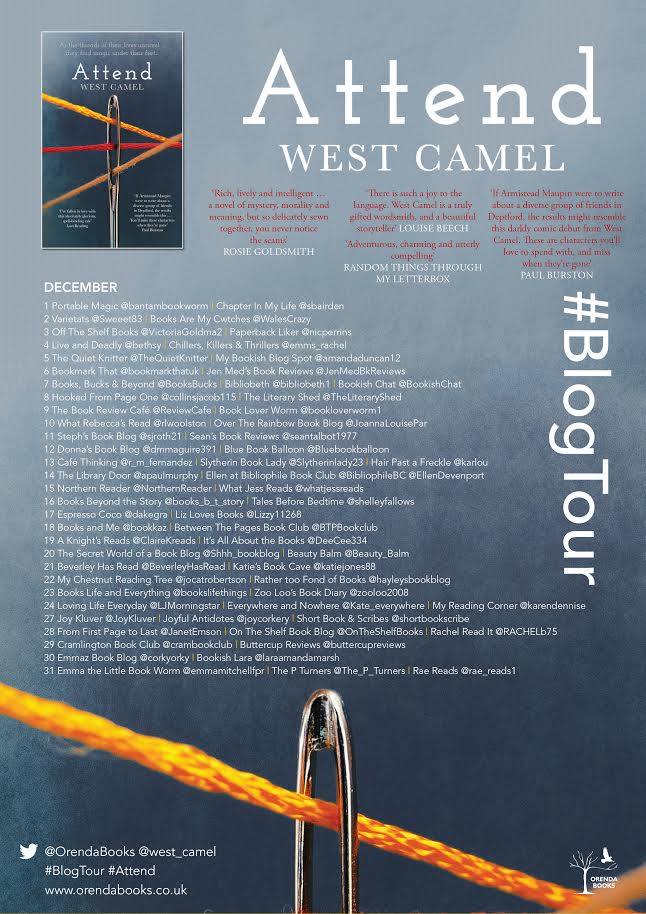 2 thoughts on “Attend by West Camel”